By the Numbers: Cooling System Upgrades

Earlier this month we took a look at CRAC and CRAH upgrades. Just how many data centers are taking the plunge and either retrofitting or upgrading? This infographic flyer from Vertiv takes a look at current thermal upgrade activity.

END_OF_DOCUMENT_TOKEN_TO_BE_REPLACED 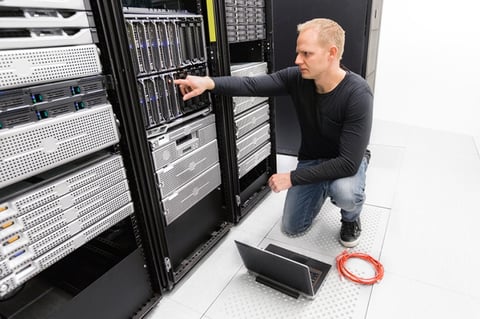 Imagine the CEO of a public company saying, “on average, our employees are productive 10 percent of the day.” Sounds ridiculous, doesn’t it? Yet we regularly accept productivity level of 10 percent or less from our IT assets. Similarly, no CEO would accept their employees showing up for work 10, 20, or even 50 percent of the time, yet most organizations accept this standard when it comes to server utilization.

These examples alone make it clear our industry is not making the significant gains needed to get the most out of our IT assets. So, what can we do? Here are six steps you’re likely not yet taking to improve efficiency.

1. Increase Server Utilization: Raising server utilization is a major part of enabling server power supplies to operate at maximum efficiency, but the biggest benefit comes in the build-out it could delay. If you can tap into four times more server capacity, that could delay your need for additional servers – and possibly more space – by a factor of four.

2. Sleep Deep: Placing servers into a sleep state during known extended periods of non-use, such as nights and weekends, will go a long way toward improving overall data center efficiency. Powering down your servers has the potential to cut your total data center energy use by 9 percent, so it may be worth the extra effort.

3. Migrate to Newer Servers: In a typical data center, more than half of severs are ‘old,’ consuming approximately 65 percent of the energy and producing 4 percent of the output. In most enterprise data centers, you can probably shut off all servers four or more years old after you migrate the workloads with VMs to your newer hardware. In addition to the straight energy savings, this consolidation will free up space, power and cooling for your new applications.

4. Identify and Decommission Comatose Servers: Identifying servers that aren’t being utilized is not as simple as measuring CPU and memory usage. An energy efficiency audit from a trusted partner can help you put a program in place to take care of comatose servers and make improvements overall. An objective third-party can bring a fresh perspective beyond comatose servers including an asset management plan and DCIM to prevent more comatose servers in the future.

5. Draw from Existing Resources: If you haven’t already implemented the ten vendor-neutral steps of our Energy Logic framework, here are the steps. The returns on several of the steps outlined in this article are quantified in Energy Logic and, with local incentives, may achieve paybacks in less than two years.

6. Measure: The old adage applies: what isn’t measured isn’t managed. Whether you use PUE, CUPS, SPECPower or a combination of them all, knowing where you stand and where you want to be is essential.

Are there any other steps to improving data center efficiency you’ve seen?