END_OF_DOCUMENT_TOKEN_TO_BE_REPLACED

Do You Prefer Hot Aisle or Cold Aisle Containment?

Separating the hot and cold air in a data center is one of the keys to improving energy efficiency.  Containment systems don't have to be fancy or expensive.  Containment systems have been in use at least since 2004, but there's an ongoing debate about whether it is best to contain the hot aisle or cold aisle.

Do you use containment in your data center?  If so, do you contain the hot aisle or cold aisle?" 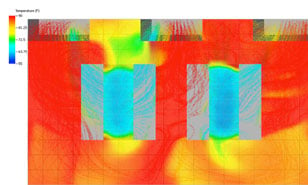 END_OF_DOCUMENT_TOKEN_TO_BE_REPLACED

What are economizer systems and how do they improve energy efficiency?

This is the year that discussions around using outside air economization will be heard at many seminars.  The introduction of Liebert’s DSE, as well as ASHRAE’s proposal to increase the server air inlet temperatures, will certainly allow considerable energy cost savings to those early adopters. Don Beaty, DLB Associates, recently conducted a US Government seminar on Data Centers speaking to how efficient we can become utilizing outside air as an economization strategy, as well as (dare I say it) primary means of cooling a Data Center.  ASHRAE has recently released a study on areas of the United States where outside air, properly filtered and metered for gaseous and particulate contamination, can be considered as your primary source of cooling. Does your outside environment play a role in this decision?  Absolutely.  A thorough site assessment with a knowledgeable company is well worth the cost.  We all need to ask ourselves why Facebook, Microsoft and others are choosing locations conducive to utilizing outside air.

What energy savings can be expected for different types of economizers?

END_OF_DOCUMENT_TOKEN_TO_BE_REPLACED

Energy costs are the fastest-rising cost element in the data center. Based on current trends, the EPA estimates that energy consumed by data centers will continue to grow by 12 percent per year. Power and thermal energy consumption balanced with energy savings is one of the major responsibilities of facility and IT managers. Intel Data Center Manager group has observed how the data center is now a source for CIOs and their technical teams to add to the bottom line through increased power and cooling efficiency.

Leading data centers are ramping up to real-time power and thermal management. There is a growing recognition of the ROI benefit through monitoring usage by device. This provides real-time energy consumption data in relation to the actual workload for individual servers and groups of servers. Collecting data of the actual power and thermal trends over days, weeks and years provides ROI benefit through the following: effective capacity planning, power provisioning, device utilization or replacement, preventive maintenance, and failure or disaster avoidance.

Here are three value drivers for power and cooling efficiency, outlining the various options for CIOs to reduce costs in the data center and contribute to corporate profitability.

What are the Promises, Challenges and Imperatives of Data Center Infrastructure Management?  Contact Us

END_OF_DOCUMENT_TOKEN_TO_BE_REPLACED

Will DC voltage in the Data Center resurrect itself in 2012?

Alternating current (AC) power is ubiquitous in data centers, and it's hard to change the status quo. But a direct current (DC) power demonstration project conducted by the Lawrence Berkely National Laboratory produced some interesting results: a 7% energy savings over top-notch AC technologies.

SearchDataCenter.com recently reported on an experiment in using DC power in a data center at Syracuse University, furthering the practical research into this data center power option. While total DC power infrastructure for data centers isn't quite ready, these investigations are putting the concept on the top of mind for data center professionals concerned about power consumption.

Will DC Take to the Data Center?  DC Power could save a bundle, but tech managers are just exploring it.

More than a century after DC bowed to AC as the most efficient method of electrical distribution, DC is getting a second look. But this time around, the ambitions of DC supporters are more narrowly focused. They're touting DC over AC as a way to make the facilities that house massive and power-ravenous data computing, storage, and communications systems more energy efficient. In a replay of the original AC-DC fight, however, AC supporters counter that tried-and-true AC, especially if it's optimized for efficiency, still reigns superior.

The battle is taking place against a backdrop of the surging "green" movement and an increased awareness of how much energy data centers use (and waste) because of how they're configured. Electrical engineering conferences, white papers, and demonstration projects that assess the comparable benefits of AC and DC for data centers have been proliferating. They've accelerated since 2006, when Congress directed the Environmental Protection Agency and the Department of Energy to oversee efforts to mitigate spiraling data center power consumption.

Has AC met its match?

DC has emerged as one possible fix, primarily because it would eliminate one of the biggest sources of energy loss and waste with AC - the multiple back-and-forth transformations and conditioning needed to step voltage down for use by IT equipment. By converting high-voltage AC to DC earlier, keeping it in DC form, and delivering it directly to rack-based servers, energy loss from conversion and the resultant heat that must be removed with cooling that also requires energy could be reduced. In fact, some studies peg energy savings as high as 30%.