What does the data center network look like in 2012?

All signs point to 10 Gigabit and 40 Gigabit Ethernet gathering steam in the coming year.

10 Gigabit Ethernet is a good starting point at the edge. It increases the bandwidth capacity for the backbone, and reduces network latency. And because it’s Ethernet, there’s built-in plug-and-play with existing equipment, reducing administration and operating costs.

How to tame these high density racks with containment data center design? 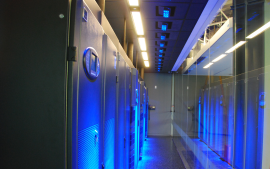 The Ever Greener Data Center