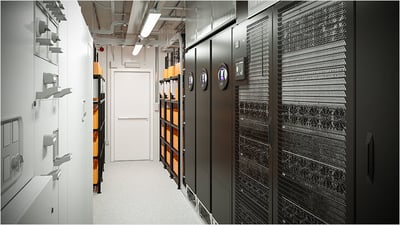 Emergency Operating Procedure (Plan). Plan of actions to be conducted in a certain order or manner, in response to an emergency event, such as an unplanned power outage.

The service of running servers on behalf of another party, allowing those organizations to focus on managing their applications, instead of hardware and operating system administration.

Intermediate Distribution Frame, a room that contains UPS power, cooling and a cable rack that interconnects and manages the telecommunications/internet wiring between an MDF and workstation devices.

A unique string of numbers separated by periods that identifies each computer using the Internet Protocol to communicate over a network.

IT Infrastructure Library. A set of service-oriented best practices to guide the data center in supporting the broader organization's needs.

Keyboard, Video, Mouse.  An interface technology that enables users to access multiple servers remotely from one or more KVM sites.

Main Distribution Frame, a room that contains UPS power, cooling and equipment interconnects and manages the incoming telecommunications/internet wiring and distributes it to any number of IDF's.

Method of Procedure. A step-by-step sequence for performing an operation. It tells the maintenance and operations technicians how to execute the actions in order to perform an operation. Sometimes called SOW (statement of work) or SOP (statement of procedure).

Need plus One, a redundancy concept where capacity is configured to including planned capacity plus one additional device to enable continued operations with the failure of one system in the configuration. This presumes immediate detection and remediation of the failed unit.

Operating Expense, the ongoing expenses related to the operation of the data center.

Power over Ethernet, allows us to power small network-ready devices without a separate power supply.

Root Cause Analysis. A systematic process for identifying "root causes" of problems or events and an approach for responding to them. RCA is based on the basic idea that effective management requires more than merely "putting out fires" for problems that develop, but finding a way to prevent them.

Return On Investment, a measure of the amount of time required to cover an investment.

Service Level Agreements. An agreement negotiated between the IT department and a user or a vendor that specifies how a service will be delivered in terms of response times, max allowable down time and other performance parameters.

A sturdy upright fixture that provides support for some other object.

The open area underneath a raised computer floor.  Also called a sub-floor plenum.

Uptime institute rating of the level of redundancy of an electrical system. 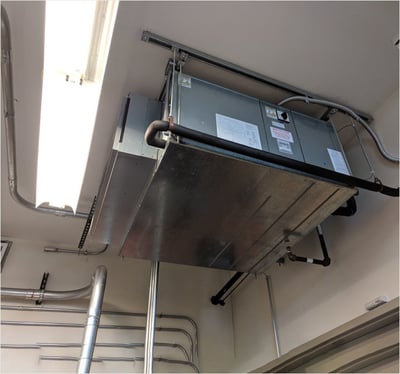 An aisle where rack fronts face into the aisle.  Child airflow is directed into this aisle so that it can enter the fronts of the rack in a highly efficient manner.

An area in which ambient air temperature is below acceptable levels.

Delta Temperature, the difference between the inlet and outlet air temperatures of an air conditioning system.

Hot Aisle Containment, system that directs heated air from the outlet side of the racks to the air conditioning equipment return ducts in a highly efficient manner.

The aisle between two rows of racks where the heat from the back of the IT equipment discharges.

Heating, Ventilation, and Air Conditioning system. The set of components used to condition interior air including heating and cooling equipment as well as ducting and related air flow devices.

In Row Cooling, cooling technology installed between server racks in a row that delivers cooled air to equipment more efficiently.

Kilowatts of Cooling.  Alternate unit of measure for the cooling capacity of a *CRAH

A general term used to refer to cooling technology that uses a liquid circulation system to evacuate heat as opposed to a condenser, most commonly used in reference to specific types of in-row or close-coupled cooling techniques.

A receiving chamber for air used to direct air flow.

Chilled airflow returning to cooling units without passing through IT equipment.  Also referred to as short cycling.

Relative Humidity. The amount of water vapor present in air expressed as a percentage of the amount needed for saturation at the same temperature.

Roof Top Unit. An air handler designed for outdoor use mounted on a roof top

Standard Cubic Feet per Minute. The volumetric flow rate of a gas corrected to standardized conditions of temperature, pressure, and relative humidity

A type of resistor with resistance varying according to its temperature.

An economizer  that redirects water-flow to an external Heat Exchanger when the exterior ambient air temperature is at or below a temperature required to chill water to a given set point, simultaneously shutting down the mechanical chiller equipment.

Direct current, an electric current flowing in one direction only.

An abnormality in the power quality that is being delivered to a system. These abnormalities can include low power factor, voltage variations, frequency variations, surges, and sags.

A mixture of sulfuric acid and water utilized in lead-acid battery systems.

Electro-Magnetic Interference. A disturbance generated by an external source that affects an electrical circuit by electromagnetic induction, electrostatic coupling, or conduction.

A rotating mechanical device that is used to store rotational energy. Serves same purpose as a battery system.

A number of occurrences of a repeating event per unit of time.  Represented in Hertz (Hz)

A device that converts mechanical energy to electrical energy for use in an external circuit.

Kilovolt Amperes = voltage x current (amperage). Also referred to as the unit of measure for apparent power of a system.

Kilowatt hours. Product of the power in kilowatts and the time in hours.

Lower Explosive Limit.  The lowest concentration (percentage) of a gas or a vapor in air capable of producing a flash of fire in presence of an ignition source (arc, flame, heat.)

Power Factor, the ratio of the real power absorbed by the load to the apparent power flowing in the circuit.

Preventive Maintenance. Maintenance that is regularly performed on a piece of equipment to lessen the likelihood of it failing.

Value of power measured in VA and represented by VAr.

Value of power measured in Watts. Sometimes referred to as Active Power.

Remote Power Panel. Device that provides circuit (or pole) capacity so that you can easily expand your server capacity without adding PDUs.

Static Transfer Switch. An electrical device that allows instantaneous transfer of power sources to the load. This superior switching time means that if one power source fails the STS switches to the back-up power source so quickly that the load never recognizes the transfer made.

Uninterruptible Power Supply. Device used to supply short term power to computing equipment for brief outages or until an alternate power source, such as a *generator, can begin supplying power.

Vented Lead Acid.  Technology of battery designed with free flowing electrolyte where water can be added, contained in a clear glass case, and used in high-capacity situations.

Valve Regulated Lead Acid. Technology of battery designed with an enclosed electrolyte system where water is not added; typically used in cabinet enclosed systems attached directly to a UPS.

A nearly ubiquitous network technology that divides data into packets or frames.  Typically ranges from 1 Gigabit per second to 10 Gigabit Ethernet but IEEE have published standards for 40 Gb and 100 Gb speeds.

Keyboard, Video, Mouse. An interface technology that enables users to access multiple servers remotely from one or more KVM sites.

Media Access Control address. A unique identifier added to network interface cards by the manufacturer that is necessary for communicating on networks.

Network Interface Card.  A computer hardware component that allows a computer to connect to a network.  NICs may be used for both wired and wireless connections.

Device for holding IT equipment, also called a cabinet.

Metal flooring on *stanchions that creates a* plenum for air flow and cabling.

The ability of a data center to maintain service in spite of problems such as power outages, server failures or network link of failures.

Storage Area Network. A storage environment that provides access to block- level data in disk arrays running on a dedicated network. SAN's are distinguished from NAS, which provide file-level data, and use an interface standard that makes them appear as local storage to the operating system.

Rack mount unit. The standardized height of one unit is 1.75"

Wide Area Network. The WAN is the backbone network that serves geographically disparate users - consisting of a combination of dedicated lines, virtual networks over the Internet and wireless technologies.

Wireless Access Point. A hardware device or configured node on a local area network (LAN) that allows wireless capable devices and wired networks to connect through a wireless standard, including Wi-Fi or Bluetooth.

Go back to the top of the page